As mentioned in a recent press release, I have always admired the historical figure, Harriet Tubman.  Not only because she led many slaves to freedom, but Harriet was known for her unwavering faith and dependence on God.   She always gave honor to Jesus for His guidance, protection and supernatural strength to endure the harsh conditions on the long journey to freedom.   Despite the fact that Harriet could not read, she would memorize scriptures that were read to her.  She would recall them in song to encourage herself and others.  She realized the power of meditation, confession and praise.

Tubman’s biography shares many accounts of her total dependence on God to do something that seemed impossible for one person, especially a woman.  During the 1850s, it was believed that a person of such strength, dedication and courage must be a man.  Harriet sought God and experienced supernatural power to do a heroic feat!   She never took credit for her unselfish desire to free others.  She knew it was God who empowered her and thanked Him continuously for His healing, grace and wisdom.  Her life inspires me to think big and trust God to do something against all odds.  If there is something you feel is impossible for you, trust God and experience His power!

But Jesus beheld them, and said unto them, With men this is impossible;
but with God all things are possible. – Matthew 19:26 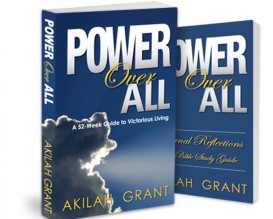